Do You Listen to NIXA Country? 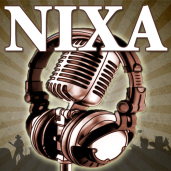 Have FUN and THANKS for visiting our NEW BLOG !!
Posted by Nixa Country at 1:11 AM

We met Nathan Stoops in May 2011 at a friends barbecue.  He let us know that he was traveling to LA for the LIVE shows of American Idol.  Nathan was playing fiddle for contestant Lauren Alaina, and when we tuned in for the show, he was on stage during several performances and ultimately 5 episodes of the show.  Lauren finished second.
We met Nathan again on stage at Big Shotz in Nashville playing fiddle for Molly Hunt during the NIXA Country Worlds Largest Fan Club Party IV on June 11th.  We were also introduced to Benji Harris, who played guitar for Nicole Johnson during her performance with us for the same event.
Nathan asked us to come see his band, Scarletta, perform at The Wildhorse Saloon in Nashville, later that night for the CMA Fest New Faces Show.  The third member of Scarletta is Aubrey Collins, who we had ironically interviewed a few years earlier, after she joined Trick Pony, soon after Heidi Newfield left that group.  Needless to say we were excited to check out this new band, called SCARLETTA !!
INFORMATION:
"Scarletta is a country/rock band from Nashville, TN
with hair-raising harmonies and unforgettable hooks."
Scarletta members are: Aubrey Collins ~ Benji Harris ~ Nathan Stoops
Their EP is being produced by Blake Chancey.
Management by: MTM/RPM Rusty Harmon.
Information source
Posted by Nixa Country at 11:59 PM

NiXa Xperience:  The show was non-stop entertainment and a big crowd pleaser.  They have a blast on stage and that always make for a great show.  We were able to meet Brian and Tyler briefly after the show.  We introduced ourselves as NIXA Country, and as always, it is cool when the artists know who you are and what we do.   We made sure they knew we were playing their music for the fans by reQuest !!
Our Background Story:
Florida Georgia Line is an band whose fans have reQuested their music on NIXA Country. When we had the opportunity to see him live at The Wildhorse Saloon after the Scarletta show, we knew we had to stay and check it out! So glad we did.﻿﻿﻿﻿

Chase Rice
New Faces Show ~ CMA Fest ~ June 11, 2011
Featuring: Scarletta, Russell Dickerson, Greg Hanna, Chase Rice, Florida Georgia Line
The Wildhorse Saloon ~ Nashville, TN
NiXa Xperience:  The show was fun and entertaining. One show and you know Chase Rice is doing what he loves.
We had the opportunity to speak with Chase after the show.  He is also very nice and says he is appreciative of the airplay he is getting on NIXA Country.
We made sure he knew his fans are reQuesting his music !!


Our Background Story:
Chase Rice is an artist whose fans have reQuested his music on NIXA Country.  When we had the opportunity to see him live at The Wildhorse Saloon after the Scarletta show, we knew we had to stay and check it out!  So glad we did.